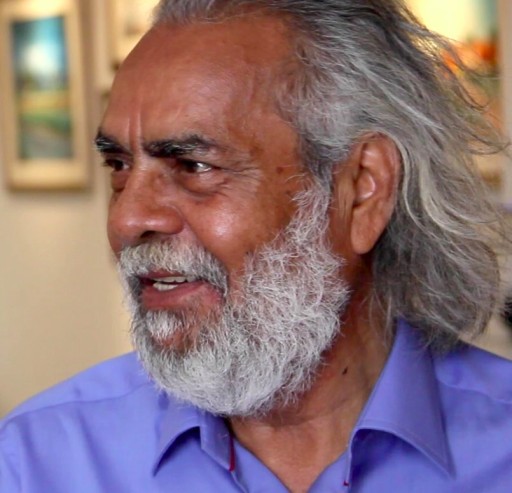 Afzal Ahmed Syed was born in 1946 in Ghazipur, India, and holds a unique place among contemporary poets of the Urdu language. He is an acknowledged master of both classical and modern Urdu poetic expression, a leading proponent of linguistic experimentation, and someone whose body of work is comparable with the best of the modern European poets. Syed attained renown in the 1980s with his two critically acclaimed works: a collection of modern nazm genre titled ‘Cheeni hui Tareekh’ (An Arrogated Past, 1984) and a second collection in the classical ghazal genre titled ‘Khaima-e-Siyah’ (The Dark Pavilion, 1988). Later Syed gravitated toward the nazm genre and became one of its leading masters. The publication of two nazm collections ‘Do Zabanon main Saza-e-Maut’ (Death Sentence in Two Languages, 1990) and ‘Rococo aur Doosri Dunyain’ (Rococo and Other Worlds, 2000) established him as an important figure in Urdu poetry. Syed is also a translator of the first rank. He has translated a wide and important body of works by contemporary British, Colombian, Iraqi, Israeli, Macedonian, Polish, Romanian, Russian, Turkish, and US poets, playwrights and novelists. Syed was the one of the first Urdu translators of Gabriel García Márquez. His translation of ‘Chronicle of a Death Foretold’ is considered a classic of the Urdu language. He was also one of the first translators of Jean Genet, whose play, The Maids, he translated from the French. Recently he translated Mir Taqi Mir’s entire Persian divan into Urdu, which was published by the Oxford University Press (2013). Syed’s poetry was anthologized in ‘An Evening of Caged Beasts: Seven Postmodernist Urdu Poets’ (New York: OUP, 1999). Urdu’s leading scholarly journal Annual of Urdu Studies has also published a special section on him (Vol 14, University of Wisconsin-Madison, 1999). His work has been widely published in leading Urdu literary periodicals such as Shabkhoon, Aaj, and Dunyazad.